Skip to content
Recently, Inc magazine published an article predicting the best industry opportunities for entrepreneurs in the coming year.
The recommended suggestions are as follows:
Biometric Scanning Software
Fraud Detection Software
Corporate Wellness
Sustainable Building Materials
Drone Manufacturing
Virtual Reality
Artificial Intelligence
Food Analytics and Tech.
This means that out of the 9 industries believed to be the perfect place for entrepreneurs to invest in for the near future. 6 of them were directly tied to software development.
It seems that the author was onto something. After all, the tech industry certainly isn’t going away anytime soon. According to Forbe’s 2016 Global 2000 list of the world’s “largest and most powerful public companies”, 9 of the top 50 were tech companies. No wonder entrepreneurs are scrambling to build startups in the tech field.
It is statistics like those shown above that attracts many budding entrepreneurs to choose the tech industry as a career path. However, most business school graduates spent their formative years studying how to build a startup or manage a company, not how to program code. The entrepreneur may have an incredible talent for marketing, managing, and maintaining a business. But know next to nothing about how to create the technologies that their new company will rely on. This leaves many successful startups becoming dependent on the ability of the developers they hire, without knowing much about the process.
How can someone with an MBA, and minimal knowledge of software programming, check the progress of software development if they can’t even recognize the code? 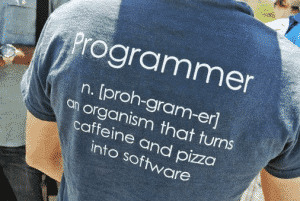 All you can rely on is the result of the final product. It isn’t ready to test until after a lot of investments have been made in the individual hired for the project. A lot of entrepreneurs find themselves crossing their fingers and hoping that the months of time and truckloads of investor’s cash won’t be wasted. When a non-technical entrepreneur ventures into building an app, website, or software program, the main challenge can be hiring a good programmer.

Hiring the Wrong Programmer Can Have Disastrous Consequences for Startups

Most startup founders put a lot on the line when developing software products. There’s usually tens of thousands (and sometimes millions) of dollars on the table. That can add up to a lot of pressure to succeed right away.
In today’s fast-paced, highly competitive world, it can feel like all new companies are judged on the grand opening. If it falters during that time, it can be very difficult to pick up the pieces. Imagine having everything on the line, mere weeks from launching the product. Only to discover that though the UI looks great, there are numerous issues with the code. At that point, you’ve got zero time, and often, no more money left to invest in paying another programmer to fix the problem in time.
With such fierce competitors vying for the attention of technology users worldwide. There’s likely to be several companies attempting to create a product like yours. One wrong move and the other startups will quickly swoop in to take your place. A good example of this is failed startup Wesabe. The online personal finance tool launched in 2007 with almost $5 million in funding.
Unfortunately, the startup Mint also launched soon after, with software that was easier to use and better designed. Wesabe didn’t get very far after that and officially closed its doors in 2010. Meanwhile, rival Mint sold their company to Intuit for $170 million. While the reason for Wesabe’s demise is still hotly debated, and likely the result of multiple factors. It’s hard to deny that if Wesabe’s programming and design had been better, there might have been a different outcome.

Non-technical entrepreneurs often use many different techniques to avoid hiring bad programmers. Some people will hire other programmers and developers to recruit good candidates for them. Even temporarily employ them for the interviewing and hiring process.
Other times, startups will hunt for talented programmers by searching through open source communities. To find the “experts” who have already proven their ability to write outstanding code. These are all excellent strategies that can yield good results. Unfortunately, there’s one big piece of the puzzle that many entrepreneurs miss when trying to find a programmer to bring on board.

As with most large endeavors, one person can’t do it all. When a single individual takes on too much responsibility, they can become overwhelmed. It creates a lack of focus and helps to develop an environment that isn’t conducive to a high level of achievement. Not to say that a freelance programmer can’t do an incredible job at an assignment or task. But to expect one person to be responsible for the creation of an entire development project is a dangerous gamble.
In normal technology companies, you have product managers, system architects, systems engineers, UI developers, designers, software engineers, project managers, and more. In my ten-year tenure at Motorola, I had the chance to work in two of these functions. If you had hired me at that time, I could successfully perform two of these roles.
My point is that very few single engineers can do these jobs. To qualify as a full-stack developer, you often need to be experienced in only 2-3 of these important functions. Once they begin to develop more skills than that, they are likely to be very expensive to hire, or they will have created their own startup.
Often, if a startup fails due to technical incompetence, it isn’t because they hired a bad programmer. It’s because they didn’t hire enough people to cover all the aspects needed to develop a successful product.
So, the best way to avoid hiring a bad programmer for your startup is by hiring a development agency. A professional organization will likely employ several individual architects, engineers, designers, and developers who are experts in their respective specialties.
Rather than relying on one person to wear ten different hats. You can invest in a team that will work collectively to produce a product that your startup can be proud to launch.